Child poverty, according to a study published by the United Nations International Childrens Emergency Fund (UNICEF), is growing at a greater rate in Germany than in most other industrialized countries. One tenth, or 1.5 million of the children in this country, grow up under conditions of relative poverty: their families do not enjoy even half of the average national income.

The situation in Hamburg is even worse: Over 20 per cent of children and youths under 15 years of age live on social assistance.

What does this mean for kids on a day-to-day basis? How do they live, what are the missing? Professor Dr. Ursel Becher, a social scientist, social worker and former independent social official in the district of Hamburg-Eimsbüttel (1987-92), has looked into the background of this situation in her work, published in August 2005, "You don't see those in the dark†¦ Poverty and Disadvantage of Children and Youths in Hamburg† ("Die im Dunkeln sieht man nicht†¦ Armut und Benachteiligung von Kindern und Jugendlichen in Hamburg"). She makes it quite clear that child poverty involves much more than hunger and lack of living space.

Social disadvantage leads to exclusion from education and from participation in social and public activities. That is why the Mittagskinder Foundation also supports educational initiatives which provide children with opportunities to organize their own lives in a responsible manner: for example, through access to books, music, theatre, sports and nature. 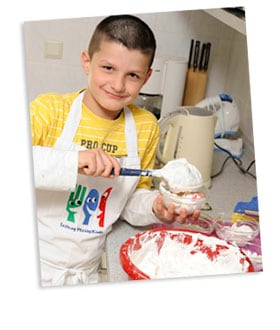